With one of those names that seems to tie into what they do (think Usain Bolt, Bill Medley, William Wordsworth…), Adam Chase has had a long and fruitful love affair with trail running which has led him to race, pace and run all over the world. Chatting with Adam Chase was an opportunity I wasn’t going to turn down!

In addition to being the president of the American Trail Running Association, Adam Chase has been a permanent fixture with Salomon since 2001 as team captain for their adventure race team and later for their trail running team and of course as a brand ambassador. He has written for several magazines over the course of his running career including Competitor Running and Running Times, has co-authored a few books with Nancy Hobbs including their ‘Ultimate Guide to Trail Running’ and was also a contributor to ‘Hal Koerner’s Field Guide to Ultrarunning’.

It’s astounding to think that he’s also a lawyer, father and husband! As you will see below, he’s also extremely modest about his achievements and immensely grateful for all that running has brought to his life.

How does he do it?

It is a constant source of wonder and awe for me when I hear about how people squash so much into their lives. When I was chatting with Adam Chase and Brian Metzler during a recent running trip to Ireland for Wicklow Tourism, I was determined to find out and glean as many tips as I possibly could!!

How have you managed to stay at the top of your game for so long? How did you adapt? Is it all about the training?

“That is easy: I haven’t! I’m feeling old and slow these days. They say, “the older you are, the faster you were,” but there’s a lot of truth to that when I recognize that I’m happy moving a full minute or two per mile slower than when I used to run.

That said, I am a strong believer in cross training, strength training, and generally mixing it up and listening to one’s body. I think that staying relatively light for one’s given body frame also helps to stay injury free or at least close to that goal. Keeping it fun really makes it flow and I find that variety helps on that front. I let the weather be my coach, governing how long I run, when I run and when I go inside to lift weights, ride the trainer or put on skis for a solid Nordic session up in the mountains.” 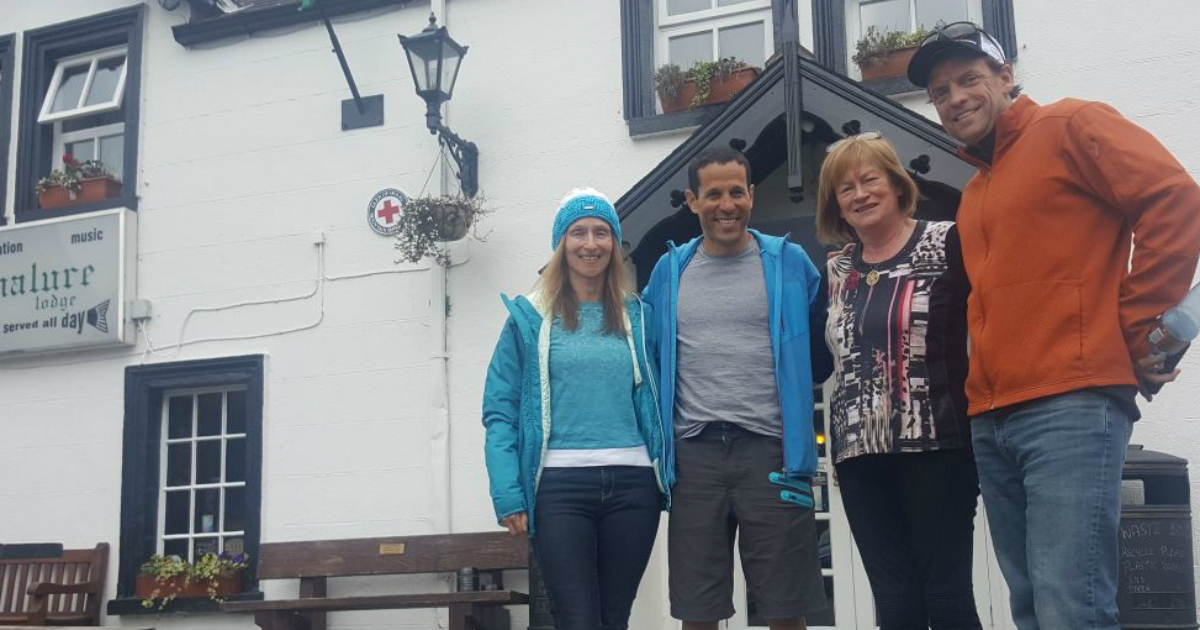 Myself, Adam Chase and Brian Metzler with Ann Dowling of The Glenmalure Lodge

That sounds reasonable, doable even.

However, I smile to myself since, as I continue chatting with Adam Chase, he reveals more to me about what his training schedule involves. And for a mere mortal like me, it seems like it would be a real struggle to squeeze that in around family and work commitments! I’m in awe!

He still runs every day. Monday to Fridays before work he squeezes in 2 hours on the trails of Boulder. Saturdays and Sundays, he runs for 3+ hours. On top of this, he spends 2 hours daily in the gym working with weights. He doesn’t take rest days anymore, but would if he wanted to be competitive! I hope his commute to work is a short one!

Adam also mentioned using cross country skiing as a winter alternative to running. Not something we’d get much opportunity for here in Ireland, but having given it a bash myself a few times, including on an Arctic Circle Expedition it certainly is a great winter alternative for runners, especially when hauling a sled behind you.  Adam heads out skiing with guys of a similar vintage, guys whose main sport is cycling/biking. He noticed that whilst they all stayed together on the long flat sections, they always seemed to pull ahead on the hills. He put this extra power down to the bike, so now he’s added that to his training repertoire too!! We might not get cross country skiing conditions here, but we can certainly hop on a bike.

How did running in the Wicklow Mountains compare with other trails you have run?

“The Wicklow Mountains offered a bit of everything, with variety ruling each day. There was rocky terrain, mud, grassy sections, boardwalk, even some dirt and sandy patches.

I always try to stay on my forefeet and to roll with the flow of the trail so I can’t say I altered my approach much, although I was rather careful on the boardwalk because that wire and those nails would smart a lot if you fell on them.” 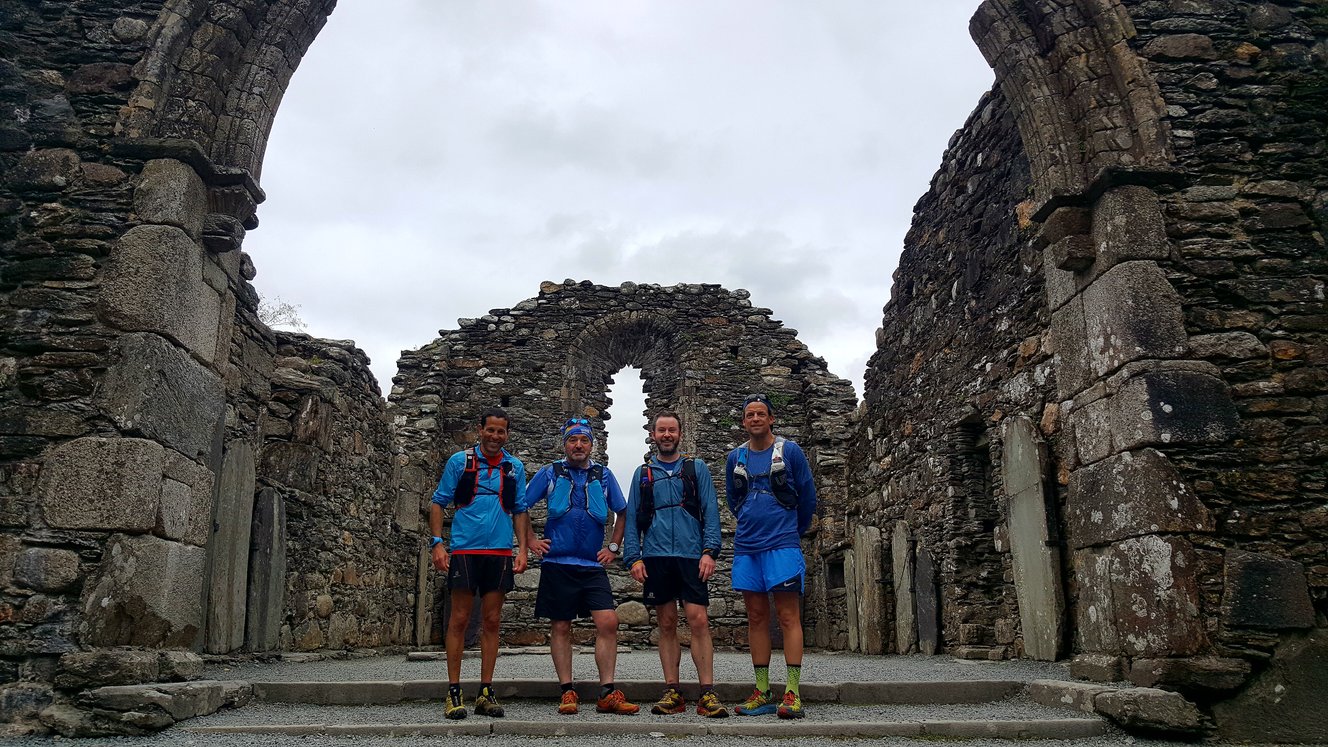 What are your Top 5 Trails (not races) that every trail runner should try if given the opportunity?

“My favorites aren’t necessarily established routes, although some were race venues and in no specific order: (1) Northern Sweden and Norway; (2) The French Alps and Italian Dolomites; (3) The tracks of the South Island in New Zealand; (4) Argentina and Chile; (5) The mountains outside of Tokyo, Japan. I could say similar things about five different areas of the US as well, given our diverse trails in New England, the Pacific Northwest, the California coast, the desert terrain of Utah, Nevada, Arizona and California, and the Rocky Mountains, where I live and train and have done most of my racing.”

It has been said that long distance running can be a selfish sport. Do you agree or disagree with this statement. Why?

“Anything can be selfish, I suppose. A lot of runners feel guilty for pursuing their passion and end up doing a lot of charity runs to assuage their guilt. I disagree with that and feel as though running makes us better people and, as better people, ones who are less likely to fly off the handle in traffic or lose our temper in a work or social setting, we help to make the world a more peaceful place.

We are less likely to get ill or cost the healthcare system as much as those who don’t exercise. We tend to be more productive, more socially involved, more politically active and, generally, more engaged. I’d like to think we are better parents, partners, friends, etc. because we run. Hopefully other people have their specific passion just like we have our running but pursuing that which helps to make us whole is hardly selfish and just because we don’t need a whole team to do that hardly classifies it as selfish.”

Hear, hear!! Although it can take us away from our families at times, if I’m in a grump, my own husband will hand me my runners and practically push me out the door!

What does running mean to you?

“Running has meant different things to me at different times in my life. I wrote a story for Running Times almost ten years ago that talks about just that.

Last year I was honored by being inducted into the Colorado Running Hall of Fame and, in my acceptance speech, I talked about how running served as a self-validation and justified my existence. When you are struggling and feel your blood pumping and muscles straining you really know you are alive.

This pursuit isn’t about beating other runners or having to showboat to impress our peers. It is something we do for ourselves. It is a way of slaking your thirst and is a personal journey. Whether defined by speed, distance, elevation gain or a specific event, we must define our mission and the process of figuring it out is just as valuable as the training and racing itself. We aren’t running from ourselves, we are running to and for ourselves and, along the way we get to figure ourselves out.

It is this drive that pushes runners to wake up when others sleep and to sweat and breathe hard and push ourselves to our limits. We thrive in finding our envelope and then pushing to expand it. After all, we look forward to this. Our desire to run is motivated just as much by the hunger to gain self worth as it is by the passion that burns within us, the eternal flame that pushes us, even when we are tired. Sometimes the fire is a monkey on our back. Others it is a monkey that dances with joy.

We, as runners, understand the feeling of freedom, exhilaration, escape, power, control, lightness, meditation, focus, equanimity, strength, clarity and release enough to cherish and nurture it to a higher level. Running is a passion that has shaped our lives. We are running super fans and it is easy to lose perspective, given this context, especially in a state like Colorado, where the allure of Nature is so compelling. We can easily forget that we are relative freaks. When ten miles becomes a “short training jaunt” or you start to measure your runs in hours rather than kilometers, you know you have strayed from the norm or, rather, joined a new norm that is different from all but a select few.”

Chatting with Adam Chase interview by Cindy Doyle. Cindy has her own blog at GoWild.ie