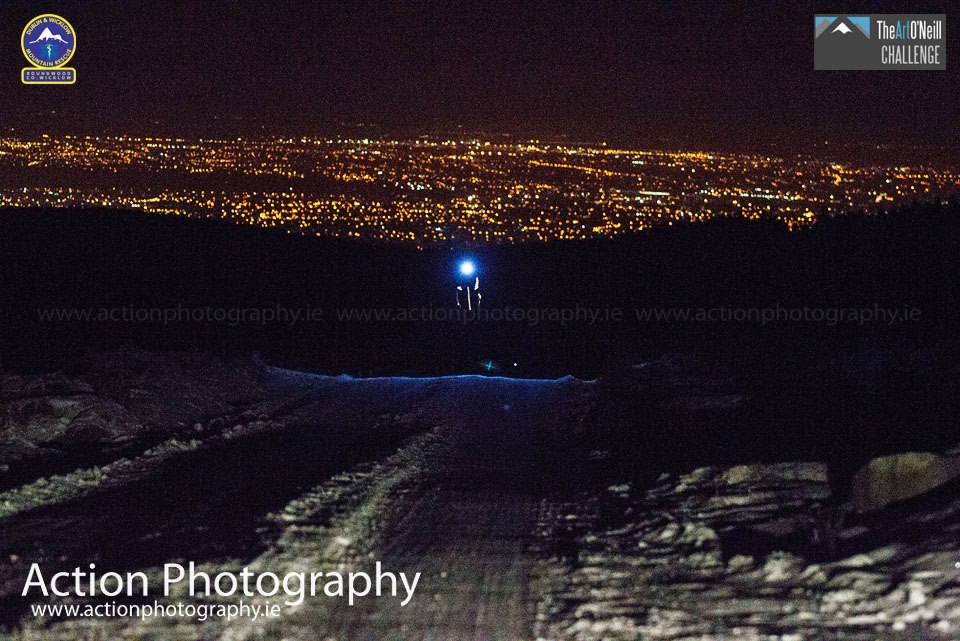 The difference a year makes
The last race report I did was this race last year and if you find it you will see that things didn’t go to plan. Now I went on to have an amazing year after it and I put a lot of last year down to the lessons I learned at ART 2015. BUT the hurt was still there so much so that I never took my race number off my bag all year I just kept it as a reminder knowing that I would be back and I would have to do better.
I had huge millage in my legs so was more than happy that they would carry me over the distance and more so carry me fast over the mountains. The road was my weak spot, so for the eight weeks before Don had me and Suzanne doing sickening speed sessions. He would tell me after every session that I was going to eat the road, I wasn’t so sure. We also spent a huge 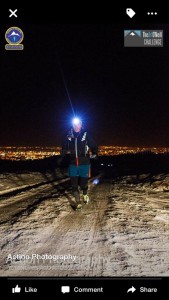 amount of time in the mountains, we had a few newbies this year and it was good fun introducing them to Billy Byrnes Gap and Three Lakes. It was all millage for me it was all time to get my own route just right.
I travelled to the castle with James, Laurence and Darren it was all very relaxed and I felt really good, BUT I did last year too. Got the registration and kit check out of the way and then was just chatting and taking in the atmosphere. I was asked a few times what time I hopped to run I would quickly change the subject and move on. The time went by quicker this year and we were leaving an hour earlier (1am). So it wasn’t long before the walkers were off 1 hour to go. I kept to myself for a lot of the last hour just to get myself ready for what I had to do, run flat out for six hours. Could I do it we were about to find out.
We were outside Declan was giving his stay safe speech and then it was count down. We were away. Suzanne was out the gate first and after 50 meters it was the two of us out in front, I had never done this in any race before and I was worried that I was doing it now. We went through the first K in 3:40 I said to Suzanne that it was too hot she said it will be ok, so we put in another 3:40 sure there was only 50 more to go.
We settled into a 4;30 ish pace and amazingly it felt comfortable. We ran side by side for 6K then I started moving away. I was moving so well even the fact I was wearing my Inov8 Talons all the way didn’t bother me once on the road. I went through 10K in 43 min very fast for what was still to come. I had set a goal to get to the bridge in an hour first goal passed I was at the foot golf place. I had planned on run walking all the way up to stone cross. Was feeling so good that I would say that I only walked 100 m.

Now the decision to go all the way in the Talons came into its own. From Stone Cross on it was ice and snow on the road, I didn’t care I picked up my water stash and rocked on. I walked another 100m or so up by the wood entrance but decided that I didn’t really need to be walking. As I got to the top of the hill where Action got all the amazing pictures I finished my drink and asked him would he mind dumping my bottle for me. I turned my watch back on to pace and set off down the hill at 4min per K another plan I had had in my head. Goal number two be at the gate into the field at 2hrs, smashed i was back on the road and heading the wrong way or so Mountain Rescue told me. I don’t think our secret way from last year is much of a secret any more but anyway at the 2 hour mark I was stepping into the farmer’s field and heading for the Liffey cold feet time.
2:40 is what I would have been happy with entering CP1 I reckoned that would put me within 10 min of the leader and I fancied my chances of making up 10 min in the mountains. In fact Luke had always said to me “don’t kill yourself on the road you will get them in the mountains”. Now I was at CP1 in 2:29 and in first place it was all in my own hands but the race was just starting. I was offered soup as I ran by the tents with the big fires in them but I just said that I was good and dibbed out and headed for Billy Byrnes thinking if I f**k up in the mountains I will never live it down.
The next 40 min was nothing short of torture. I knew the snow was there I had been out the Sunday and Tuesday before so I knew what was waiting 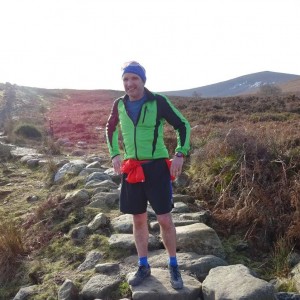 for me. It was beautiful up there crystal clear and no wind. Just knee deep snow. Just coming into CP1 there was a light behind me I was now at the fence post where the walkers path heads to the left I turned my light off and had a look NO light following me time to make the gap as big as possible.
I had bumped into Eoin Keith in Dundrum shopping centre on Friday afternoon. I shook his hand congratulated him on his amazing race and immediately asked him was he running tonight. To my delight he said NO. He wished me well for the night and as I walked away I thought this is a good omen. See If I am being honest I knew in my heart that if I ran at my best that I had a chance to be in the mix. I also knew that my strongest leg was CP1 to CP2 and here I was and it was starting to hurt. I want through a bit of a low spell on the last climb up I thought of my friend John who introduced me to the race in 2013 and thought back to that race when we did it as a” just finish it adventure” now here I was 3 years later with a real chance of winning it. At the top I took a drink and looked around there were a good few lights but I knew they weren’t that close. I decided I was going to win this race on this decent and I let rip. I moved really well and really fast over the ground and in no length I was getting over the fence and up onto the fire road. I opened up the legs again on the fire road and was delighted that I could move fast. As I jumped the barrier and got to the road Don pulled up I stopped for a minute had a drink of coke (thanks Clare) and told Don that I wanted to cry that is how I felt. He told me to bring it home and I was off into CP2 1:29 I knew this was fast and I knew it would be over in 2 hours.
To break 6 hours on the ART was something that I wanted to do but I wasn’t sure I could do it so as I left CP2 at 4:58 that became my new goal break 6 hours. I was still able to move with a bit of speed on the fire roads but knew I was in for a hike all the way to the top at 3 lakes ish…. I had done this river crossing a dozen times this year with no drama but not tonight. I stood on a slippy rock and my head was in the water I jumped up and was delighted not to have banged anything I put on a dry hat and started hiking.
The route I chose is the safest navigation wise I don’t think it’s the quickest in fact I had been trying a new route but couldn’t get it 100% right even tho I knew it would be a few min faster. But with the leg I just had and the fact there was no lights behind me I knew it was fast enough and that I wasn’t going to get lost. The snow got really deep again as I got up into the basin so it was just a matter of keeping moving. Had another bit of a low spell on the climb out which is the last climb of the race really, this time I thought back to where I was this time last year 2 hours slower and contemplating getting into my bivi bag for a rest. Had a little laugh to myself and headed on.
I found my own tracks. Myself Laurence Luke and Chris had done CP2 to finish on Tuesday night and our tracks were just the same as we had left them this meant I could turn my brain off and just try and run.
I made it down to Darren’s little three and headed my usually rout out to the right to pick up table track early. I turned my light off and could see no other lights around me could I start to believe I was going to win.
I hate the run down I know you are back on runnable ground but you just want to be finished. I wasn’t concentrating and it could have all ended in tears only 2K from home. I stood on ice and ended up flat on my back. I lay there for a bit waiting for the pain, it never came my bivi bag and first aid kit had taken the hit I put my head torch back on and I was off. As I ran by the hostel I took one last look behind me no lights a look at the watch 6:49 I was going to break the 6 hours I enjoyed the last 200M I enjoyed the run across the bridge I enjoyed my friends calling my name. 5:51.35 I had just won the most iconic ultra in Ireland.
Yvonne was there with hugs on hand. Maria, Ellie, Clare and Karina who had been out all night to support us thank you all for that. And last year’s winner my friend and coach Don who made me work so hard and made me believe that I could win this great race.
Now what happened next and what I said next I have no idea as a camera and microphone were pushed in my face. Well I guess I will have to watch Nation Wide to see what I said.
I learned on Friday night Saturday morning that I wanted it more than I even knew myself, I ran at 110% for very nearly all of the race 100% just would not have been enough.

The Art O’Neill Challenge is an early January, 50km run / walk from Dublin Castle across the Dublin/Wicklow mountains.
On January 6th, 1592 Art O’Neill, his brother Henry, and Red Hugh O’Donnell made a bid for freedom from Dublin Castle. It was the middle of winter and Ireland was held fast in its icy clutches but they hoped to reach the relative safety of the remote Glenmalure Valley over 50km away.  Ill equipped and underfed they were the only prisoners ever to successfully escape captivity from Dublin Castle but it was an ill fated journey with Art O’Neill dying from exposure only miles from his goal.