A few Irish went to Romania and these are the various reports: 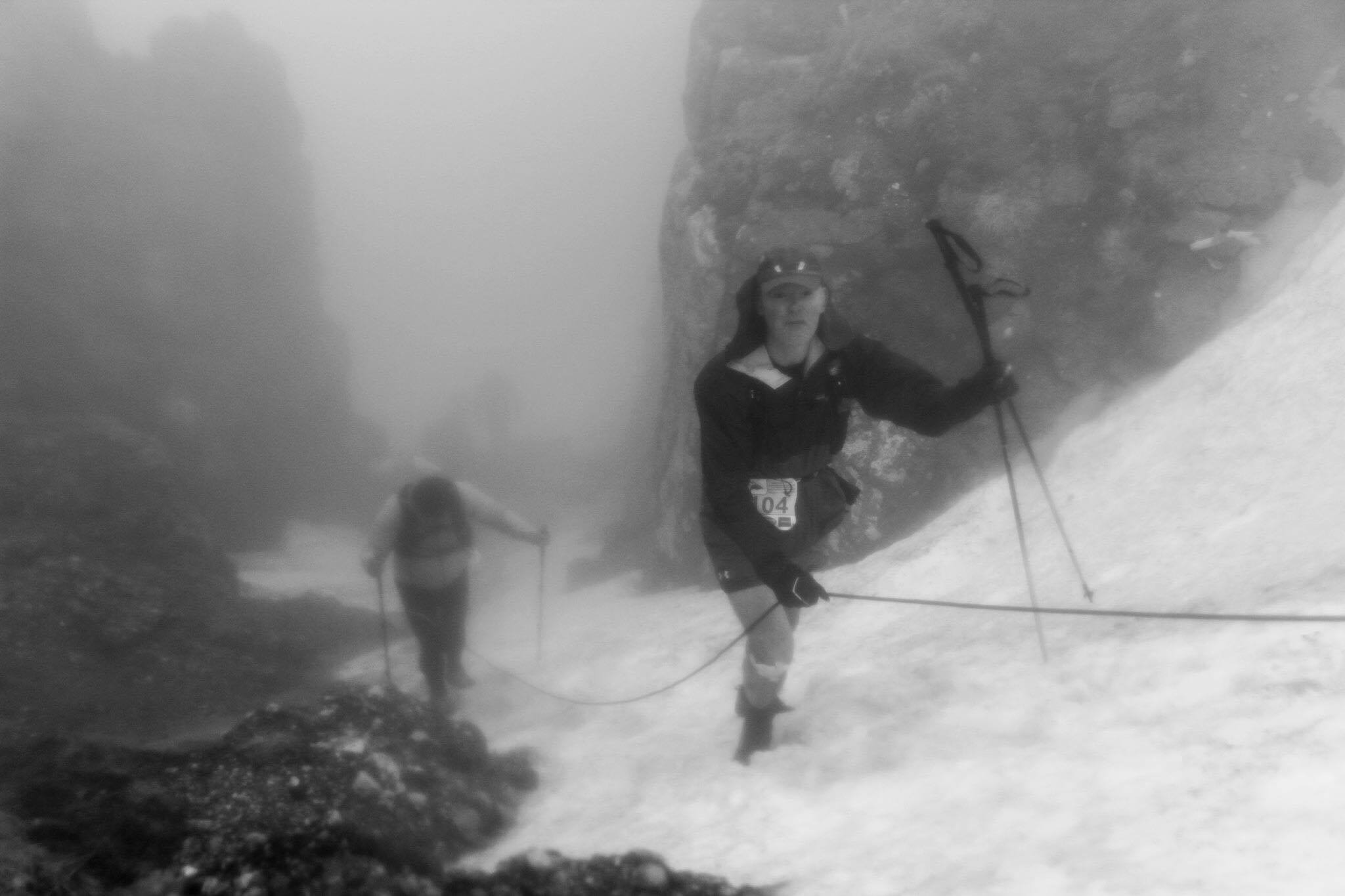 First race report to do so hope its of use to those who might want to enter in the future. I found the race by accident on the net while looking at options. It appealed to me because it has a no of options from 20k to 100k .Anyway a few months later I signed up for the 50 and then found out there was a good gang going from Ireland .(10/11 in all) .Training for last 2 years has been a bit hit and miss with injury so I decided this year from Jan it would be minimalist. I only did 450km from Jan to May but also cross trained in the gym quite a bit. I actually had a plan !!
However the one thing that was worrying me was the elevation and the actual route of the course.ie 2 big climbs in first 12km .You can train all you like on hills in Irl but it doesn’t prepare you for that sort of gig.. Anyway off we went – flew to Bucharest and overnighted and then hired a car to drive to Bran next morning ( 2.5 hours) .Got a good b/b close to the Castle and then found the Hall to check in .The kit check was very au fait and that did alarm me. “Have you shoes and a jacket” – yes say me – ok “ see you tomorrow”.

Back to b/b and started to pack kit . I decided to follow the mandatory kit list and leave nothing out .The weather was about 18 degrees at the Castle but you could see the mist above higher.
Sat morn 6.30 we assembled at the start at Bran Castel 750m .Said hello to Don and Stephen and Fintan and then at 7.00 we were off out main gate , quick right up main street and up road for about 2k .I stayed with Stephen and Fintan and we chatted .Weather was nice and I wore shorts and tshirt .We entered the woods at about 2.5k and then very subtly we were climbing. I knew we had a 1500m climb in first 10k so there was going to be no rushing .The ascent changed very quickly to a steep hike and you knew this was going to be different. I then had my first gear fail .Zip on bag broke while taking out phone to take a picture. I managed to catch up with Fin but had lost Stephen .Out of woods onto mountain and zero visibility in mist and wind. I stopped and put on long top and coat and hat and gloves. Felt really good and was enjoying it .We were up about 900m. the terrain started changing from trail to crossing snow / ice crevices/gullys which to be honest I never looked down! .At about 1400m we met 4 people coming in opposite direction .There was about 20 / 30 of us ( including 10 US Marines) and we were now lost .we had missed a marker in the fog .It was hilarious .Suddenly all this technology appeared out of pockets , gps, maps ,compasses , there could even been a hairdryer or 2 but we were lost . Anyway a decision was made and we scrambled down side of mountain ( very steep) and found the track but we had lost at least an hour and now time was against us .Pace was now up and I was just trying to stay with the jacket in front .Visibility was about 3 metres .Suddenly we are descending a very technical trail( myself and a Romanian guy) This was steep!!.About 100m from the bottom I caught my foot in a root and went flying .The first rock gashed my knee and the second one took the brunt of my head.( the rock was ok). Got up and made checkpoint Malaiesti with about 20 mins to spare .The medics saw me coming in and went to town on me .A bit embarrassing for a few grazes but they were really nice and helpful. Fin came in after me .He told me to carry on and would catch up. I looked up and saw the real big climb ahead to Omu .Snow, ice and mist awaited. It was here I met a 68 year old man doing his 160th Ultra- incredible.(I was doing my 16th) .Very quickly ,we were in snow and ice and wind and then we entered a narrow gully about 200m in length with rope affixed to side and with fully compacted snow and ice underfoot. Every step was a mini climb .Second gear fail here as when I had put my gloves back on at checkpoint ,I couldn’t get lining on inside to sit right and therefore they were a bit loose. Holding rope in one hand and poles in other and knees touching the snow , I could feel the fingers freezing. However in a crazy way the climb was exhilarating but you knew if you slipped you were taking out every one behind you in a domino effect. .Got to top to be told we still had 300 m of steepish run climb to peak of Omu. Its now raining and there is no visibility. 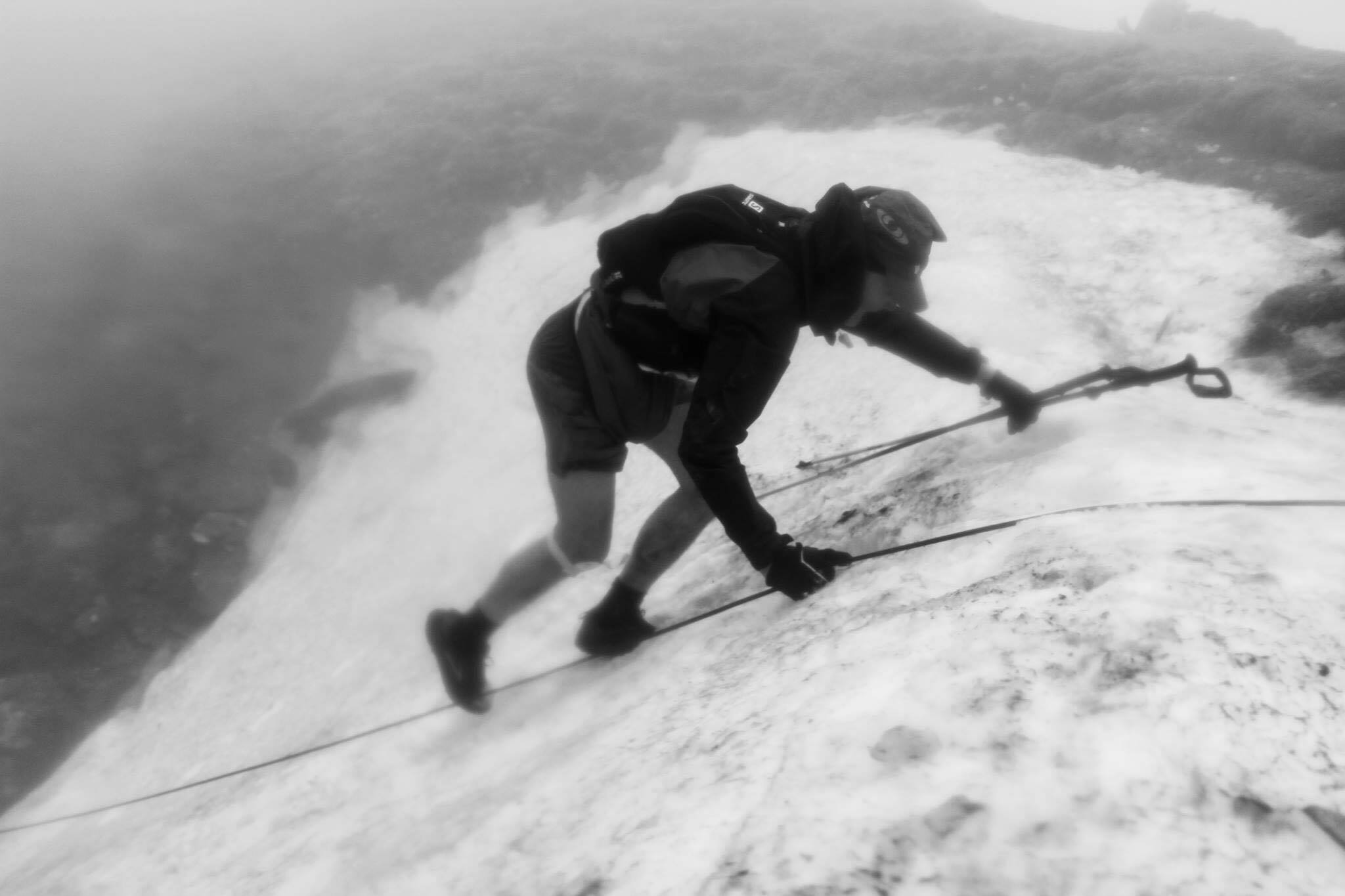 Immediately descended with an American couple and a real nice Romanaian guy (Stefan) .Then on the run down there was an almighty bang of thunder and Lightning and the heavens opened .We were completely soaked in seconds .I was still in shorts but wasn’t cold as jacket was doing its job. Hands were frozen though. At next route check , I lost concentration for a second and twisted my ankle .I knew there was some damage but adrenalin is a great drug. We made it down to Pestera checkpoint with 5 mins to spare(27 k in 8 hours!!!) for some hot food .Met an English guy who had already gone back up the mountain to find his lost phone !! .He now had done 700m more than all of us. We had a nice run through a Forest park for about 2 k before next ascent started -a short sharp 300m but the sun came out. I met up with a Dutch guy and we were now back entering the woods again .These next 2 sections of about 20 km involved short little ascents( very step) and then very sharp technical descents. When you managed to get into the trails, they were gone and were replaced by pure treacle mud. They were totally unrunable and any time you thought you would make up here was now gone . I made it to last checkpoint which was completely washed out at Polana Gaura ( well done volunteers for staying out) .Weather kept changing from hail to rain to fog. At this stage I had my last fall on a very steep mud slide. I cracked my hip and I would say every bear in Transalvannia heard my howl .I was now on my own , very sore and struggling a bit with my eyesight .Could just make out the yellow markers.. And you guessed it was blowing my whistle just in case .Very eerie in big woods on your own in the mist.Does a bear shit in the woods, I dont know but i was!! To be honest though no sane bear or dog would have gone out in that weather. I made it to the road, ran the last 2 km, missed turn for the last 0.5k and came into finish line from wrong end !!! ( 13 hours 53 but I didn’t care- I loved it)
Comments

A truly great race, up there in my top 3
One not to be taken lightly .
Obey the mandatory kit check and then some.
Its more of an adventure race than a running race and therefore is dangerous with a risk of accidents a real possibility.
volunteers and Romanian people – the best
Will I be back…………………..that’s another story 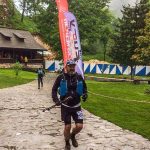 “The course is tough, brutal even but absolutely exhilarating. You have to be prepared for that and accept it. It is certainly the toughest 50k I’ve done, a good deal tougher than the Art O’Neill, for example.”