So Decathlon got in touch with us a couple of weeks ago, and asked if we could review their Kalenji Run Light.  We put the light to the test and have two reviews for you:  Finbarr took the light around Bray Head, while Cindy chose the forest trails and open hillside around Glendalough.  Following the review, Decathlon is offering 10% DISCOUNT on all their gear until the 19th of December.  Check details at http://trailrunningireland.com/decathlon-ireland-online-shop/ 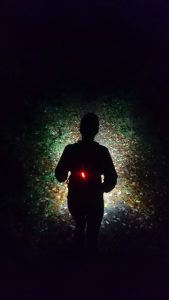 Cindy on the trail

Introduction:
According to Decathlon, the Kalenji Run Light was designed for runners who want to light their path at night. With a powerful beam of up to 250 lumens, the Kalenji run light will illuminate the first 20 metres in front of runners perfectly so that they can see where their feet land and avoid obstacles that could obstruct their route. That’s quite a claim! As a regular night time trail runner, it was one I couldn’t resist putting to the test!

Fit:
As a one size fits all, I wondered whether the Kalenji run light would shrink enough to fit my narrow build, and also whether it would be as suitable for a woman as it might be on a man. However, I was pleasantly surprised with how comfortable it felt on. 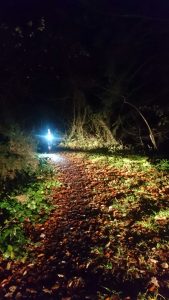 Functionality:
So, does the light live up to its’ purported features? It’s certainly lightweight enough to be comfortably worn for up to two hours of running, and I love the security of being visible from behind. Not only is this a nice feature when a trail crosses a public road, but it’s also reassuring to look ahead and see the red flashing lights of a running buddy on the trail ahead! However, whilst the light is certainly bright and clear on the two most powerful settings, I wouldn’t go so far as to agree that it illuminates the 20m ahead of you “perfectly”. As with most torches, there is a diminishing effect. With the run light, this occurs after about 7m, when the light begins to lose some of its’ punch. The 250 lm setting proved to be the most useful on the trail where you need to continuously assess foot placement and avoid obstacles such as tree roots, bog holes and slimy rocks. It was feasible to lower the setting for wider forest tracks and roads.

Conclusion:
The sensibly priced Kalenji run light is ideal for users of urban trails and larger forest trails where the terrain underfoot is reasonably predictable. For runners who prefer rougher terrain, this light still has a place amongst your running kit. Since it’s positioned lower on your body, it does have the disadvantage of casting shadows around obstacles. However, for the same reason, it works remarkably well at cutting through fog and mist. On particularly tricky terrain during a recent foggy night, I found using my head torch AND the Kalenji Run Light simultaneously resulted in a perfect combination!

DECATHLON 10% DISCOUNT ON ANY ORDER BEFORE 19th DECEMBER
To avail of the offer, create and account, and at checkout, click on “I have a voucher” and enter the code trail10 – the discount will show up once they get to the payment stage.  Offer valid until the 19th of December.
Start Shopping at:  decathlon.ie