Home Destinations In the Shadow of Giants – Running Monte Rosa

In the Shadow of Giants – Running Monte Rosa 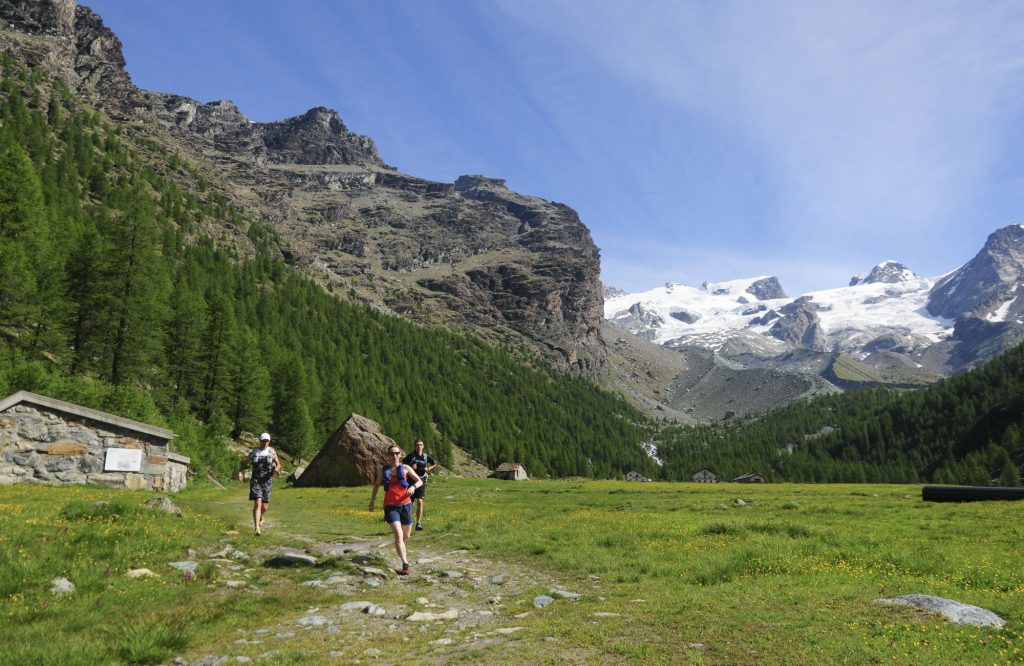 Leaving Castor and Pollux behind us

I could hear the roar as we continued snaking our way up the track, skipping over roots, and dodging the rocks which protruded haphazardly from the trail. Larch trees and alpine roses, like a guard of honour, welcomed us into the ever narrowing valley. To my left, glimpses of distant glaciers taunted me, and as I rounded the bend, the source of the roar revealed itself.

Cascading over glistening rock, torrents of icy water charged down the gulley, bringing with it a welcome blast of cool air and a damp mist. The scent of wild thyme drifted on the breeze as we mounted the rocky steps beside the waterfall and the gulley widened once again into a valley, offering us more breath-taking views. The twins, Castor and Pollux watched our progress, but The Matterhorn, like a reluctant bride, remained stubbornly hidden behind a veil of cloud.

It was Day 4, and already I was beginning to forget how tired my legs felt on the initial steep ascent. Grinning to myself, I fell into that familiar, meditative rhythm. Breathing. Moving. Living. 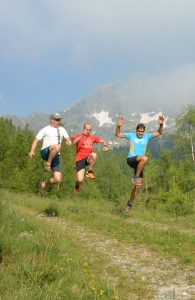 First, there’s Lizzy Hawker’s Ultra Tour de Monte Rosa (which takes place the week after the UTMB). Anyone who has read Lizzy’s book will appreciate the journey she undertook to ultimately decide on becoming a race director of her own ultra races (116km and 170km).

You might also be aware of the crazier Tor des Géants 330km Endurance race which takes place the week after that. It tours the most scenic areas of the Aosta Valley along the well-known (amongst trekkers) Alta Via 1 and 2 routes. With an elevation gain of 24,000m, runners have a maximum of 150 hours to complete the challenge. It’s so insane that it has taken on an allure all of its’ own. I’ve met some competitors. They seem normal enough people, but the stories they tell of sleep monsters and runners circling villages for hours is unfathomable to most ordinary runners. Many of the mountain refuges dotted along the trails act as aid stations on this event, and many locals volunteer on it – so if you do visit the area – ask about the race and the legends who manage complete it.

With a third race recently added to their ultra calendar (The Monte Rosa Walser Trail), you would be forgiven for thinking perhaps that the trails here must be inundated with runners. Amazingly that’s not the case. In fact, you don’t meet the multitude of walkers you meet in some other alpine areas either. In mid-June at least, the sense of peace and space is fantastic. 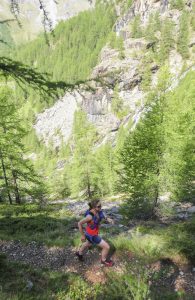 You don’t need to be able to run mad distances to enjoy the beauty of the terrain and the captivating running here either.

Those of you who know me, also know that these races are way out of my league. And all things considered, they’re probably not on the (immediate) horizon for many average trail runners either.

Despite missing out on 9 weeks training this year (thanks to my epic fall), I still headed out mid-June to meet up with other runners and the Soul Running team. I won’t lie. I was bricking it. It’s one thing to feel great about yourself after a jaunt up Lug. The Alps are another thing altogether. We were a motley crew. A very mixed bag of abilities and aspirations. I wondered how it would pan out.

As it transpired, I discovered that The Monte Rosa region suits mixed ability running groups rather well. With trails directly from the villages, long distance runners can have an early run and be joined by mid and short distance running friends after breakfast. Some routes offer tougher and easier sections which link up again at refuges for lunch. It makes the ideal training ground and running holiday for those who run 100km+ races and also, surprisingly, for mere mortals like me! 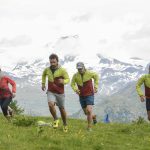 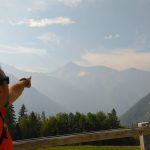 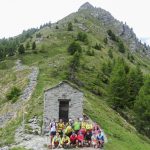 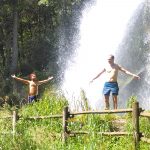 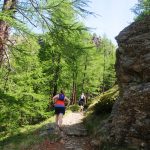